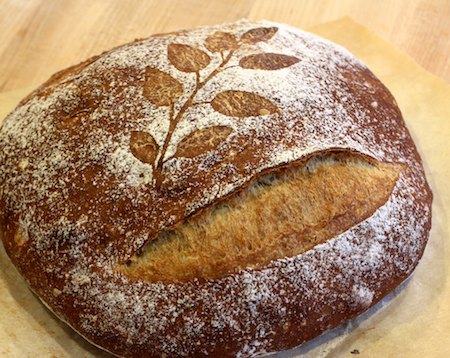 Well, I’m a day (or two) late and a stencil short, but my Rewena Paroa, a traditional Maori bread made with a fermented potato starter — and Lien’s choice for the Bread Baking Babes this month — is finally out of the oven.

Being a New Zealand bread, the decoration should depict a silver leaf fern, and I tried, I really tried, to craft one even half as lovely as Lien’s intricate example. My scissors had other ideas, though, and it was just not happening, so I resorted to the garden. I have no ferns, so I made do with a vine I’m embarrassed to say I don’t even know the name of. Flattened between the pages of a heavy book for a couple of hours, it served as a decent stencil, if you forget that it’s supposed to be a fern.

This is a really wonderful loaf, with the softness and red-golden color typical of potato-enriched breads. My dough seemed a bit sluggish so I gave it a longer bulk fermentation and one more fold than the recipe called for, and it paid off with a beautiful open crumb. 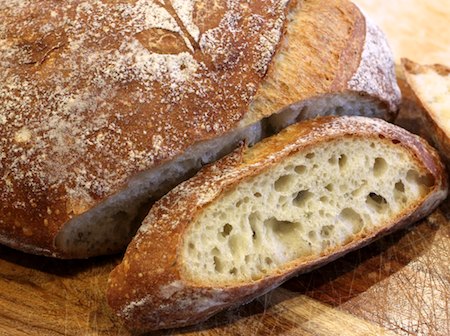 Lien’s recipe is below, with my notes in italics. For insights and inspiration from the other Babes, see the links in my right sidebar. Please try it and be a buddy! Send your own Rewena Paraoa to Lien by March 29 to participate.

To prepare the rewena, place the potato and water into a saucepan and then boil until the potato is soft, leave the lid off. Mash the cooked potato in the water and add extra water until you have 250 g in total. Put into a bowl and cool until lukewarm. If the mashed potatoes are too hot, it will cook the starch in the flour. Mix in the flour and honey to make a soft dough. Cover with plastic wrap and set in a warm place until the dough ferments. After one day you’ll see a few bubbles on the surface, after two days a lot. You can use it after two days or up to three, if you’ll leave it longer it’ll be over its strongest point. [I used mine after 2.5 days]

To make the dough, put all the ingredients into a large mixing bowl and, using a wooden spoon, combine to form a soft dough mass. (You may need to adjust with a little more flour or water.) Knead the dough in the spiral mixer for 8 -10 minutes (starting on speed 1 or 2, halfway on speed 3) until the dough (almost) clears the sides and the dough is smooth and elastic. [I mixed until I could pull a decent, although fragile, windowpane.]

Place the dough into a lightly oiled large bowl, cover with plastic wrap and leave in a warm place. Once the dough has almost doubled in size (this will take approximately 1 hour), tip the dough onto the bench dusted with flour and gently knock it back by folding it onto itself three to four times. Return the dough to the lightly oiled bowl, cover with plastic wrap and leave for a further 30 minutes in a warm place. [My bulk fermentation was about three hours, with folds at one and two hours.]

Fold the dough to form a large rectangle. This doesn’t need to be exact, just as long as it’s tight and compact. Place on a baking tray lined with non-stick baking paper and cover with plastic wrap. Allow to prove for approximately 60-120 minutes, depending on room temperature. [Mine proofed about 2 hours and 15 minutes.]

(optional) Cut a silver fern-leaf or Maori moko design stencil out of stiff paper. Remove the plastic wrap from the dough and place the stencil on the dough’s surface (I sprayed the stencil with grease, otherwise it would have got stuck on the dough), then with a fine sieve filled with a little (white rye) flour, lightly dust flour over the stencil so you are left with a pattern on the loaf. Carefully remove the stencil. Using a sharp knife or razor blade, cut around the edge of stencilled pattern.

Preheat the oven to 220ºC [425F] with a baking tray or baking stone inside (the stone should really be hot!) and a small ovenproof dish on the bottom shelf. Place the loaf in the oven [I kept mine on the parchment when I placed it on the stone] and quickly throw 4-5 ice cubes into the small ovenproof dish and close the oven door. [I used my usual steaming method.]

Bake for 10 minutes and then turn the tray around, reduce the oven temperature to 200°C and bake for a further 20-25 minutes, or until the crust is a dark golden brown and the bottom sounds hollow when tapped. [Mine baked a total of 34 minutes, plus another 10 minutes with the oven turned off and the door ajar.] Remove from the oven and place on a cooling rack.