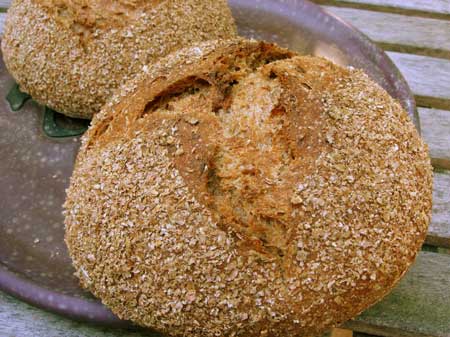 Did you look at the title of this post and think you were going to get something along the lines of one of those glossy magazine articles on how to live fashionably on a budget by taking a single outfit from the office to the evening with the simple addition of a few well-chosen accessories? (You know, the ones where you start with one ridiculously-priced suit, replace the businesslike button-down blouse with a silk décolleté cami, add the diamond necklace, Fendi bag, and Blahnik stiletto slides, and you’re good to go? Bargain city.)

Sorry to disappoint, but this isn’t exactly that. It is the decidedly less glamorous story of how I made two breads with EXACTLY the same ingredients (no baker’s diamonds here), the first only so-so and the next a bit better, by paying closer attention and changing just a couple of things in my method.

I hope it’s obvious that the plump loaf in the photo above is the Better bread, while this flattened one is the So-So: 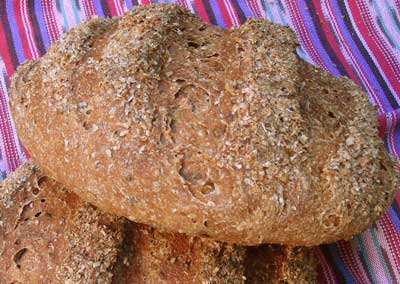 In case you’re not convinced, compare these slices: 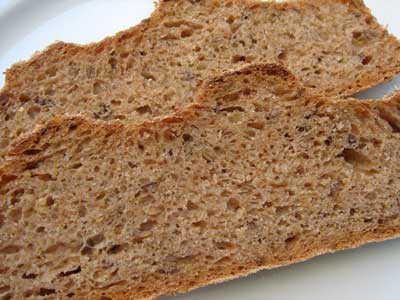 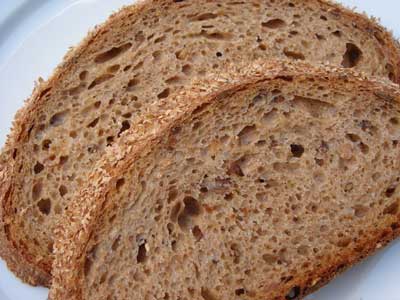 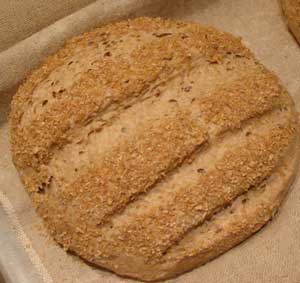 So huh? Well for one thing, Bread So-So proofed too long. A big clue to this was that the dough was already starting to fall apart by the time I put it into the oven (see the breaks on the surface, between the slashes?) Virtually no oven spring was another tip-off.

By paying more attention the second time around, I was able to get Bread Better into the oven after a more appropriate proof time. The day I baked Better was considerably cooler than the first time around, so fermentation was slower, and the actual clock time was not all that much shorter. Taking temperature into account, though, I’d say So-So proofed about 50% more than Better. 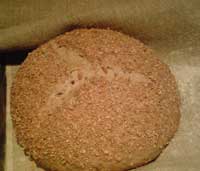 My other mistake was being too slash-happy on Bread So-So. Too many, and too deep, which allowed the loaves to spread out excessively. A more moderate approach served Bread Better… well, better. (Note: on doughs with a very large proportion of whole wheat or rye flour it helps to slash before proofing, and to do it at a 90-degree angle to the surface of the loaf, rather than at an angle as for many other breads. Both So-So and Better got this treatment.)

Both breads tasted great, with an assertive sour flavor, moist (if dense – just the nature of the beast) crumb, and toothsome texture provided by the seeds.

Before the recipe, a note about the name/composition of this bread: The 1.6% white flour comes from the white starter I used to make the levain. If I were a purist, I would maintain a whole wheat starter in addition to my white one. Or at the very least I would have exercised a modicum of advance planning and converted a portion of my white starter to whole wheat a few days before making the bread. I often do that, but I didn’t for these. Sosumi. 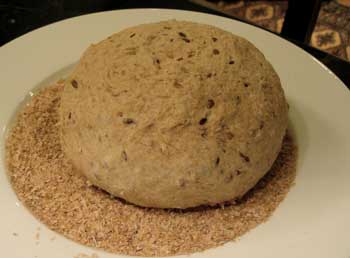 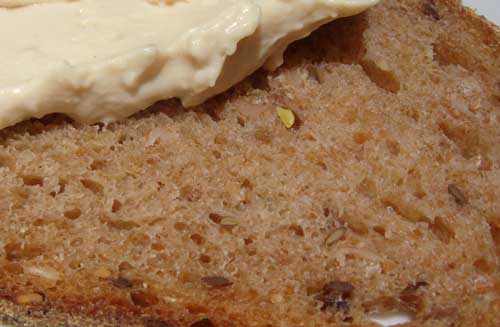