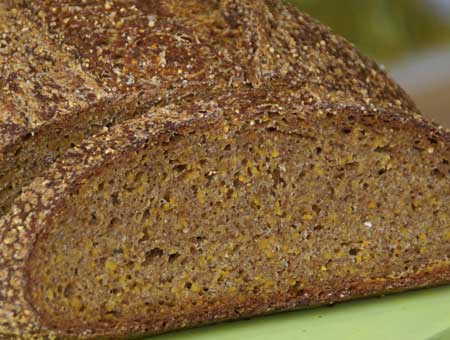 I’ve been a little accident-prone lately. Which is to say, careless. In the past five days I’ve managed to smash a tailbone, a toe, and a finger (I’m fine, really). Luckily, my latest accident involved no bodily injury and resulted in a very nice bread.

My intention was to use 400 grams of whole wheat sourdough starter in this whole-grain bread, but instead of weighing it out I blithely dumped in the whole lot of it, which I’m pretty sure was about 550 grams. By the time I realized the error of my ways, it was too late and there was nothing for it except forge ahead and see what developed.

As it turned out, the addition of the extra sourdough did not seem a bad thing at all. Gluten development is tricky to begin with in 100% whole-grain breads, and the inclusion of quite a lot of coarse polenta here did not help matters any, but the acidity in sourdough helps to reinforce gluten structure. Also, I found the combination of the sourness with the sweetness of the molasses to be interesting and delicious.

That said, there are a few things I might do differently on the next go-around:

If you aren’t fond of heavily-textured breads that require some effort in the chewing, don’t make this. However, for a little less crunch to the polenta, you could try hot water, and a little more of it, in the soaker.

This is my submission for BreadBakingDay #13, Whole Grain Breads, hosted by Jude (Apple Pie, Patis, and Paté) and founded by Zorra (1x umrühren bitte aka kochtopf). 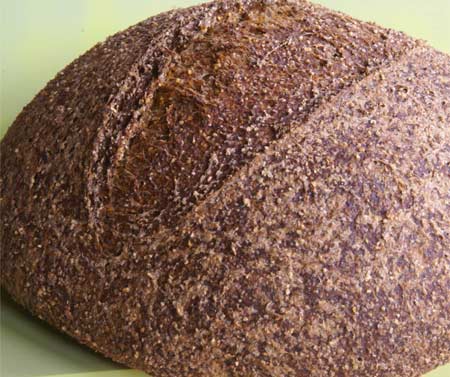 (This is the recipe as I made it. See notes above for possible modifications.) 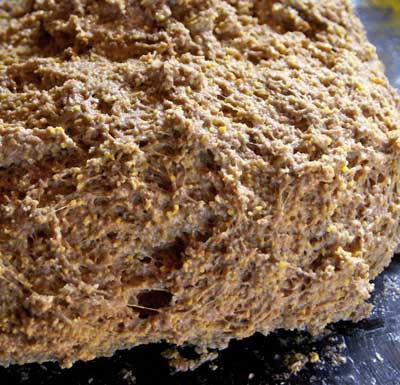