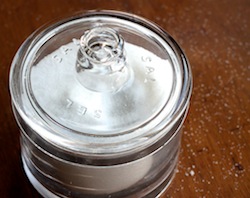 A recent commenter on one of my recipe posts remarked: “… my dough was very sticky not coming together. … Thinking it must be too wet, I added a little more flour to no avail. Then I realized I had forgotten to add the salt. Shortly after adding the salt the dough came together well. Is this coincidental, or does salt play more than a flavor enhancing role? ”

This was absolutely not coincidental. Considered to be one of the four essential bread ingredients (along with flour, water, and yeast), salt does indeed do something more than loafing around and tasting good.

All of that said, the primary role of salt in bread remains to enhance flavor. If you’re on a low-sodium diet, I wouldn’t discourage you from experimenting with reducing the salt in your doughs, or making a saltless Tuscan bread; just be aware that your dough is likely to be stickier and the fermentation time might need adjusting.

Typically the amount of salt in a dough is between 1.8 and 2 percent of the amount of flour, by weight. If there is a large proportion of other ingredients, such as seeds, for which salt also enhances flavor, the percentage of salt could be a little higher.

Some people say non-iodized salt is best, but I haven’t noticed a difference between iodized and non-iodized in the finished product. If you use Kosher salt, remember that it’s “fluffier” than table salt, so you’ll need more by volume (although by weight you’d still use the same amount — and we’re all measuring by weight, aren’t we?)