I suppose this bread is a study in how it is possible to lose sight of the preponderance of evidence and allow yourself to be led in a different direction by becoming fixated on a single detail.

Although this was a perfectly fine bread, it was surely not what Görel had in mind when she asked the Bread Baking Babes to undertake Brunkans Långa, the “long loaf” from the Brunkebergs Bageri (bakery) in Stockholm. 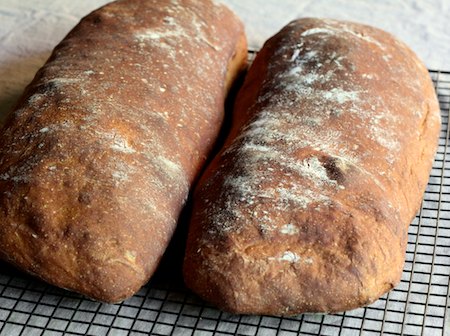 The evidence I had before me was this:

So that was the evidence, and to have considered it thoughtfully would have been to conclude that we really do not want to go adding a lot of extra water to this dough. Right?

And yet I, very consciously and deliberately, added an extra (not 20, not 50, not even 100, but) 165 grams of additional water to this dough. Which made this a 73%-hydration dough. That’s getting into ciabatta territory.

And that is because, instead of considering the preponderance of evidence, I single-mindedly focused on one word — four tiny little letters — in the recipe, and that word was “pour.” As in, “pour out the dough.” I formulated my own fixed idea of what “pour” should mean, and I stuck to it stubbornly, despite the preponderance of evidence. So as I mixed, I ran a constant dialog with myself: “Can I pour this dough? No? Add more water then.”

Consequently, I wound up in a very different place with this bread from where most of the other Babes (Görel, Lien, Natashya, Sara, Elizabeth, Elle, Astrid, Karen, Lynn, Tanna, Ilva) wound up. I think I’m lucky that it was not a bad place (in fact, it was quite a nice place; the bread tasted great), and even if it had been a bad place, it was just bread, after all.

But sometimes it’s not just bread, so maybe it’s good to remember that a more holistic view, which takes the preponderance of evidence into account, might be, in general, a good thing to shoot for.