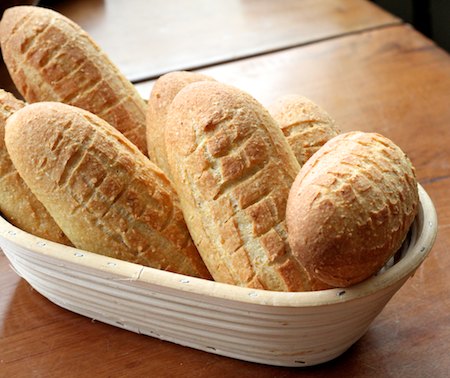 Corn has a bad reputation lately. As a major component of America’s industrial food system, corn represents cropland abuse, genetic modification, cattle sickened on a grain diet, children sickened on a corn-fed-beef-burger and high-fructose-corn-syrup diet, a wacky government subsidy system. All too true.

But of course the blame for these ills lies with the humans that produce and consume big-business corn (and that would be most of us, by the way; if you ever eat prepared food, chances are there’s corn in there somewhere). Blaming corn is like blaming water for acid rain.

As a grain and a vegetable in and of itself, unrefined, unengineered, and responsibly grown, corn is pretty upstanding. Sure, you’d be in trouble if it were all you ate. But it’s a decent source of fiber, B vitamins, and vitamin C. Native American cultures were and are sustained by it. My childhood summers would not have been the same without it. Neither would chili and guacamole.

So, in defense and celebration of this innocent, nutritious, and tasty food that is the theme of this month’s BreadBakingDay (hosted by Heather and Zorra), I wanted to bake something that not only comprised corn but announced loudly, I’m corn. You got a problem with that? Bite me!

Would you put a basket of golden corn ears on your breakfast table, warm and ready for a drizzle of honey? (Many thanks to my friend Elra for this jar of wonderful local wildflower honey.) 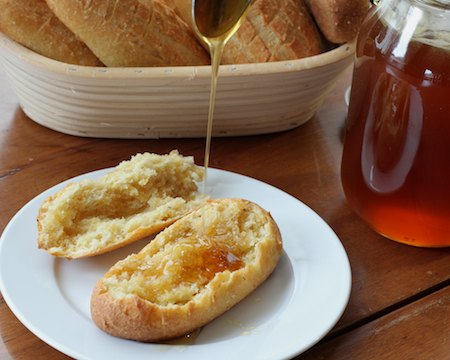 To make the ears, I shaped the rolls much as I would shape a larger batard:

After the dough (recipe below) is divided into pieces of approximately 100 grams, preshape each piece into a ball. After a 20-minute bench rest, flatten the ball, smooth side down on a lightly-floured counter, to degas it. 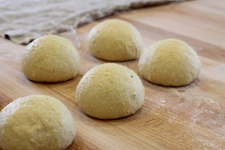 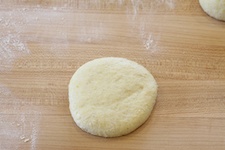 Fold the top corners of the ball in to form a point at the top, then fold the point to the center and press with your fingertips to seal. Brush away any loose flour that has been picked up from the counter. 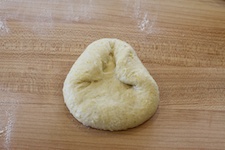 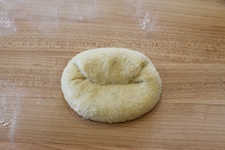 Turn the ball 180 degrees and repeat the above steps on the other side, overlapping the center seam slightly. 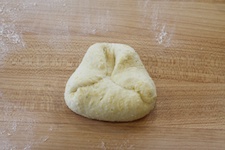 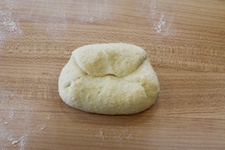 Fold the dough over on itself  at the center seam and seal with your fingertips against the counter. You now have a smooth, compact cylinder of dough. 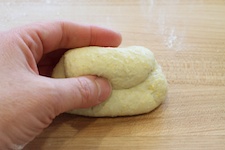 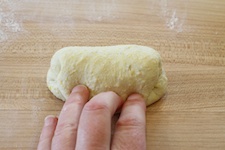 Roll the cylinder on the counter to elongate it. Then further roll one end to taper it slightly, to resemble an ear of corn. Before baking, score the top with a crosshatch pattern to make the “kernels.” 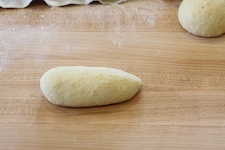 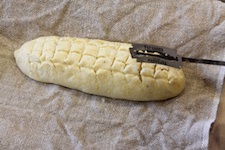 You see me scoring on the couche here because I experimented with scoring halfway through the proof, but I found that doing it just prior to baking kept better definition of the cuts, although making so many cuts so close together on fully proofed dough requires a very swift and sure hand. Also, I don’t recommend scoring on the couche because if your hand slips, it’s a good way to slice through your couche. If I had done this in baking school, I would have gotten at least 10 demerits.

The recipe makes 12 rolls, which just fit on my 15 x 23 inch baking stone. If your stone is smaller, bake them in two batches. As with all bread, you should allow the rolls to cool completely after baking; however, they can then be rewarmed before serving, which really brings out the corn flavor.