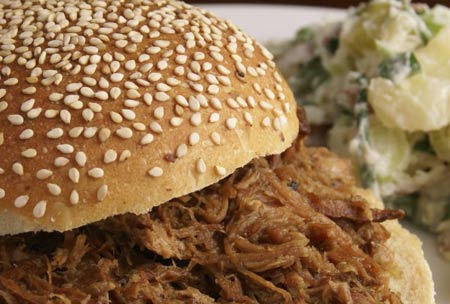 What was your latest baking experiment gone right? Here’s mine:

2 pm: I remembered to take the pork out of the freezer yesterday. I remembered to start slow-cooking it early this morning. I’m starting the sandwich rolls so they’ll be fresh out of the oven when the pork is done… Doh! I’ve forgotten to make the prefermented dough.

There’s no time to make a preferment now. I have my sourdough starter, but only about 60 grams of it, not enough to make true sourdough rolls. OK, it’s not a mega-disaster in the scheme of things. With what will (hopefully) be a super-flavorful pulled pork on top of them, a straight-dough roll will be just fine. Sure to top store-bought, anyway.

But I’m feeling experimental. I’ve been saving the toss-off from a few days’ worth of sourdough feedings. I have a couple hundred grams of it in the refrigerator, waiting to be used in pancakes, or maybe destined for the compost bin. Those wild yeast have been languishing, close to death, and will not be very effective as little fermenting machines in my dough. But maybe I can use that old starter to bring some flavor and acidity to my rolls, which is what preferments do best. It’s worth a try.

7 pm: Dinner. The pulled pork is lovely, and the sour rolls provide a very nice counterpoint to its sweetness. I’m calling my experiment a success.

To be ultra-clear, I’m not advocating substituting a bunch of old tired sourdough for whatever preferment any recipe calls for. Nor am I suggesting that even freshly-made preferments are generally interchangeable; using a different type of preferment can affect lots of things, including flavor, dough strength and fermentation time. If you make a substitution, you will get a different bread, maybe subtly different, maybe markedly so. In the case of my rolls, their flavor was much more sour and their texture less soft than the original recipe from which they were born.

So I do this sort of thing with the “Try It and See Mode” button firmly in the “On” position. That said, there was a method to my madness. I approached the investigation with two principles in mind: 1) keep the amount of prefermented flour in the experimental formula the same as in the original; and 2) keep the amount of each of the ingredients in the overall formula the same also. It sounds complicated, but it’s not – really!

To begin, l looked at the original formula (it’s exactly the same as the hamburger rolls I posted about last month, only scaled down to make 6 rolls instead of 10):

But I also had to keep in mind that 206 grams of OTiS would contribute 103 grams of water, whereas the prefermented dough would have only contributed 67 grams. So I subtracted that extra 36 grams from the amount of water in the final dough. Similarly, the 2 grams of salt that would have been in the prefermented dough (but were not in OTiS) needed to be added to amount of salt in the final dough. As for the yeast, I decided to call it a draw and see how that worked out.

So the modified formula became (with changes from the original in bold):

Actually, I was able to use the 60 grams of active starter I had on hand, plus 146 grams of OTiS, to get the 206 grams. And I ended up further modifying the formula a bit, to use only 50 grams, or one whole, egg; I added a little more water to compensate, rather than having to open a whole second egg just for that extra 10 grams. I followed the method, including first fermentation and proofing times, for the original rolls.

If I had had 206 grams of fresh, active sourdough starter on hand, I could have used that, and omitted some or all of the instant yeast from the final dough. However, I would have anticipated needing to increase the fermentation times, especially if the sourdough had been the sole leavener.

So, what was your latest bread-baking experiment?