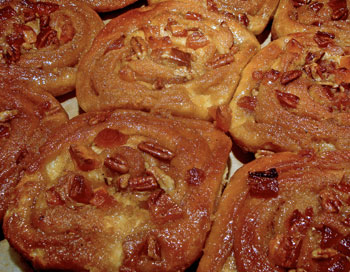 The buns turned out pretty well in the end, but not before I met with a handful of issues involving an unintentionally huge quantity of dough (half of which still sits forlornly in my fridge, destined to be tossed), an incorrect oven temperature, and scribbled notes spread out in at least four places, only two of which I can seem to remember at any given time.

So all I can muster at the moment are a few photos as evidence that I truly did bake these buns, and a promise that I’ll pull the recipe together and post it sometime in 2008. (It really is a good recipe!) 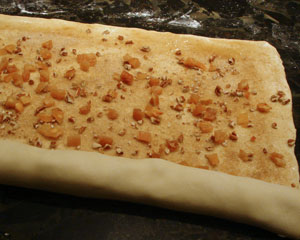 In the meantime, if you want to make them, just take your favorite cinnamon sticky bun recipe (like the one that was the Daring Bakers’ September challenge), replace the cinnamon with cardamom, and fill and top with chopped pecans and dried pears cut into 1/4-inch dice. The result is a not-too-sweet combination that turned out, after all was said and done, to be popular with my Christmas-week houseful.

As always, thank you to this month’s BBD host Chelsea, and to BBD’s founder and keeper, Zorra.

Happy New Year everyone. Here’s to new beginnings in 2008! 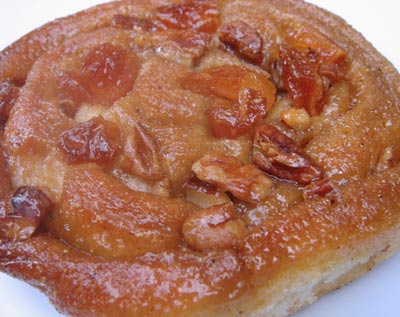