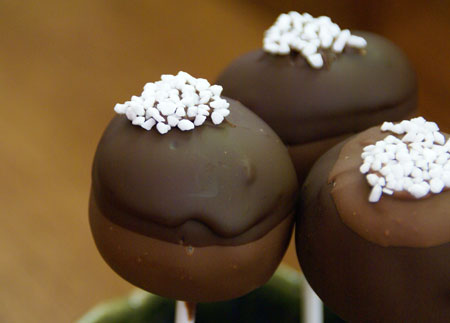 Well, it just figures. The one time — the one and only time in my ever-hopeful-but-never-successful cheesecake-attempting career — that I manage to bake a cheesecake that doesn’t crack, I can’t show it off. I can’t carry it triumphantly to the table to admiring “ooh”s and “aah”s and “look, no Grand Canyon in that cake”s and “she’s such a cheesecake star”s. Nope, I’m obligated to transmogrify this one beyond all recognition. Not only that, but I didn’t even have the brains to take a photo of it in its pristine, glorious smoothness.

I had to get that off my chest, but I’m really not all that broken up, because the mutation was in service of a good cause. Elle (Feeding My Enthusiasms) and Deborah (Taste and Tell) gave us Daring Bakers an excellent challenge this month: Cheesecake Pops. It’s a recipe from Sticky, Chewy, Messy, Gooey by Jill O’Connor.

The idea is that you bake a cheesecake (and it doesn’t even have to be a lovely, crack-free, perfect cheesecake) and scoop it out into little balls which you then impale on sticks, freeze, and dip into chocolate plus any other coatings your heart desires.

It’s not something I would have ever come up with myself in a million years, nor is it even probably something I would have tried if left to my own devices, but then that’s the point of Daring Bakers. And the truth is, this was a lot of fun, and pretty delicious. The challenge allowed for ample creativity in the decoration of the pops, and from the looks of their creations, I think my fellow Daring Bakers had fun too. 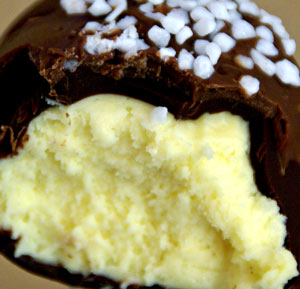 As usual, I have a few thoughts and observations:

Thanks to Deborah and Elle for this month’s great challenge, and thanks too to Lis (La Mia Cucina) and Ivonne (Cream Puffs in Venice), the founders and fearless leaders of the Daring Bakers. They have worked tirelessly to bring us a brand new forum that is not only robust enough to stand up to constant dishing about the challenge by hundreds of Daring Bakers, but also has a public area where non-DBs can engage in baking banter. Nice work!