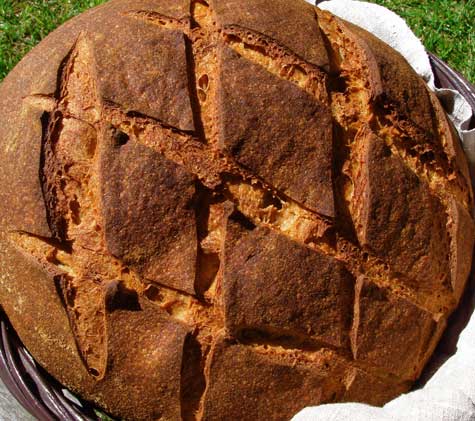 A few days ago I brought one of these miches to dinner at the home of people I’d never met before. In retrospect, this was one of those “what was I thinking?” ideas, because it could have been awkward if they had turned out to be bread wimps. Luckily, they weren’t, or they were very gracious about hiding it. Huge and chewy and sour, with a crust so dark it might be mistaken for burned by the uninformed, this miche is some serious bread.

I’ve had trouble pinning down the exact definition of “miche” (French slang for “butt-cheek,” according to Daniel Leader’s Local Breads). I believe that nominally it is a large, round, somewhat flattened loaf, but beyond that it seems that most breads that call themselves miches involve sourdough and a substantial proportion of whole-grain or high-extraction flour.

While this bread looks like it takes more than a day-and-a-half to make, most of that is simply building up the levain (sourdough), which requires no more than a brief mixing of ingredients. This bread is a little unusual in that the final dough contains a large proportion of levain, compensated with a short first fermentation. And notice that the building of the levain includes the somewhat atypical addition of salt. Because the fermentation time of the levain is quite long, the salt slows the yeast down a bit and helps prevent over-fermenting.

You’ll need a 10- or 11-inch bowl or basket for this. A colander, salad bowl, or shallow mixing bowl lined with linen or a non-terry cotton towel are all fine candidates if you don’t have a large banneton. 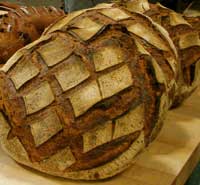 For the miche pictured above, I used very little flour for dusting the linen lining the bowl. A heavier dusting will produce something more like this, which is also very handsome. (Photo from my Advanced Breads course at SFBI, from which this recipe is adapted.) The diamond scoring pattern is traditional, but you can do an initial, or anything else that strikes you. 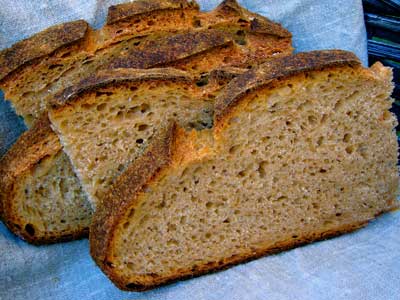 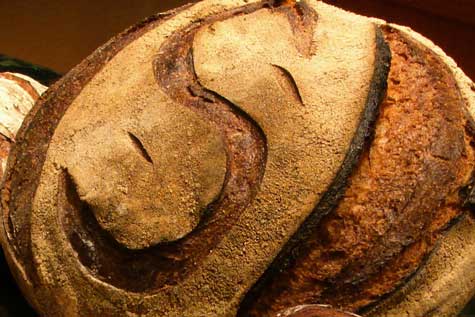