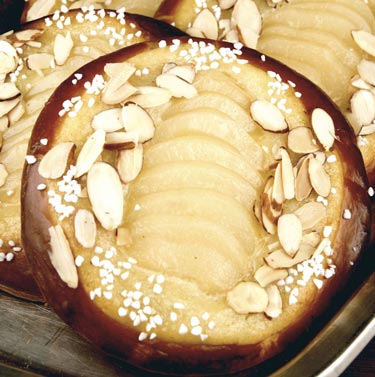 Frangipane is essentially a baked almond pastry cream. In school we learned to make it by combining vanilla pastry cream, a cooked custard that can be used without further baking, with almond cream, which is not pre-cooked and lends a lighter, cake-like texture. There are plenty of other frangipane recipes out there if you don’t want to use this two-part process, but the pastry cream and almond cream can also be used on their own, so they’re nice recipes to have, and you can vary the proportions of each depending on the texture you want your frangipane to have (more almond cream for a puffier frangipane). Zoe Bakes has a great photo tutorial on making pastry cream.

This brioche is a little different from others I have posted, in that only the sponge, and not the final dough, needs to ferment overnight. This works well if you decide late at night that you must have brioche the next day and don’t want to stay up through the dough’s long mixing and hour of fermentation before you get to put it to bed in the refrigerator. Just throw the sponge ingredients together, and get back to it after you’ve both had your beauty rest. If you’re a bit better at planning, this pumpkin brioche dough, or this plain one, would also be wonderful for these tarts. 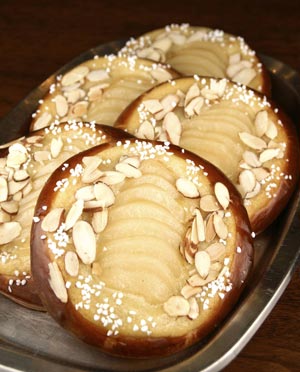 Time (not including the preparation of brioche dough and frangipane; see below):