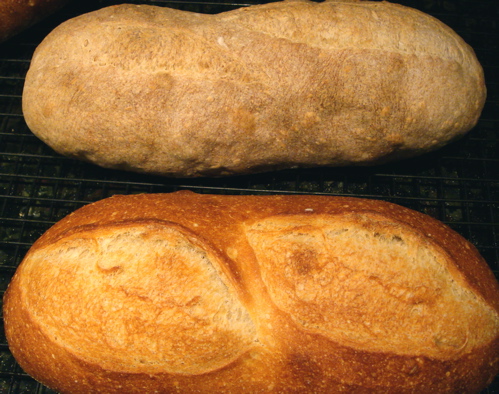 Steam is important during the initial phase of baking most hearth breads. It facilitates oven-spring by preventing the crust from setting too rapidly, and enhances crust color. Breads baked without steam can taste fine, but the crust is likely to be a dull, pale grayish color rather than the rich brown most of us are after. Ready for a photo quiz? Hint: the top thing is not a peanut on steroids.

I have spent way more time than I should have scouring books and online articles and discussion groups looking for the perfect way to introduce steam to my baking loaves. I’ve spent hours and hours, and more than a little money, trying just about everything. But in the end, it’s come down to two methods that work for me. 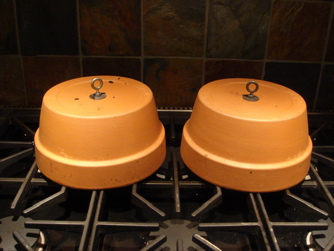 The first is a home-made version of a La Cloche Brick Oven, made for a fraction of the cost. I got the idea from a contributor to The Fresh Loaf. The materials (one unglazed 10-inch terra cotta flower pot, one eye bolt, two washers, two hex nuts) were under $15. You can buy a lead-testing kit if you want to make sure the pot is lead-free.

Two of these fit in my oven, and each can cover a 2-pound boule or small batard. I preheat them in the oven along with the baking stone. Then when the proofed loaves are loaded onto the hot stone, I immediately cover them with the preheated cloches. The moisture in the dough itself provides the steam; no spraying or other addition of water is necessary. The cloche simulates a brick oven, holding the steam close to the bread. The cloche is removed after the first 10-15 minutes to give the crust a chance to brown. This is my method of choice when I’m baking one or two loaves that fit comfortably under the cloches. 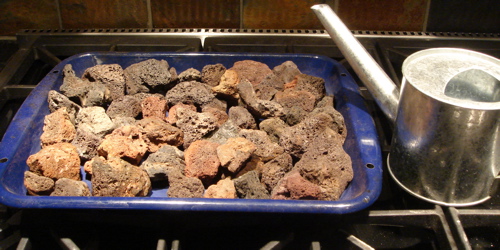 Woman cannot live by boules alone, though. For those times when I can’t use the cloches, here’s what works: I place a shallow pan filled with lava rocks (the kind used for barbecue grills) on the bottom rack and allow it to preheat with the oven. It is as far forward and to one side as possible, with the baking stone a couple of racks above it. Two or three minutes before loading the proofed loaves, I throw a damp dishtowel into the oven and remove it just prior to loading the bread (tongs are good for this). This pre-humidifies the oven chamber. (I can’t absolutely swear that this does any good, but I think it helps.) Once the bread is in the oven I quickly pour about 3/4 cup hot water into the stone-filled pan and shut the door. An oven mitt is essential to keep my pouring hand from getting a steam burn, and a long-spouted watering can is a good idea too. After the first 10-15 minutes I remove the steam pan from the oven; although all the water may have evaporated, opening the door to vent the moisture is important.

If I make any radical new steam discoveries, I’ll pass them on. For now, though, I’m pretty satisfied with these methods, until I can figure out a way to install a professional steam-injection oven in my house.