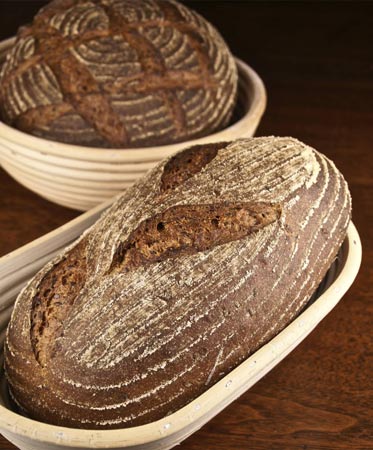 My husband is a very patient person. He puts up with a lot in support of my baking hobby (even considering that he’s a happy beneficiary of it). A fine (or sometimes more than fine) dusting of flour over pretty much the whole house, equipment overflowing the cupboards and stacked on the floor and every available surface, books that leave no shelf space for so much as a phone directory — none of this elicits even the bat of an eye from this man.

So when he casually and calmly mentioned one day recently that my ingredients were overrunning the refrigerator, I paid attention. Time to spend down some of that baking capital: seeds, nuts, more seeds I bought because I forgot I had the first ones, grains, and special flours that have insidiously taken over way more than their fair share of fridge and freezer real estate.

Starting with the flax seeds. Flax seeds are delicious and nutritious and crunchy and beautiful, which clearly explains why I felt I had to buy about 2 or 3 pounds last time I stocked up. (This is maybe 7 cups of seeds — which is a pretty sizable helping of those healthy omega-3 fatty acids.

This flaxseed rye, adapted from Jeffrey Hamelman’s Bread: A Baker’s Book of Techniques and Recipes, was a really great way to use some of those seeds, as well as some of the high-gluten flour that is also in abundance at my house right now. Even though I used whole rye flour in place of the original recipe’s medium rye (I’m not allowed to buy more ingredients!), the texture was amazingly un-dense for a 60%-rye bread, and the flavor combination of flaxseeds and rye is just about unbeatable. I may even increase the flax seeds next time I make this (because I do still have plenty of those seeds left). 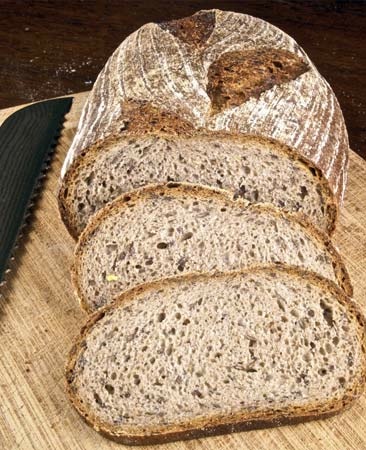 One thing that helps with maintaining a more-or-less round cross-section of an oblong rye loaf is to keep the slashes running more across the loaf than down its long axis, which is something I didn’t do here. For some examples of better scoring patterns, as well as some notes on working with rye doughs, take a look at my 47% Rye Bread.

The recipe calls for a rye starter. I don’t normally maintain one, so when I need one I take a portion of my 100%-hydration white starter and simply feed it with rye instead of white flour over a few feedings. No doubt some purists would slap my hand for not keeping a long-term rye starter, but I’m not losing any sleep over it.

Flaxseed Rye
(adapted from Bread: A Baker’s Book of Techniques and Recipes by Jeffrey Hamelman) 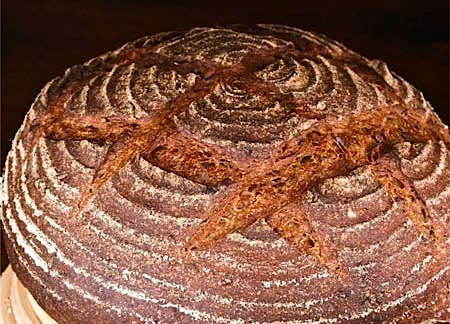