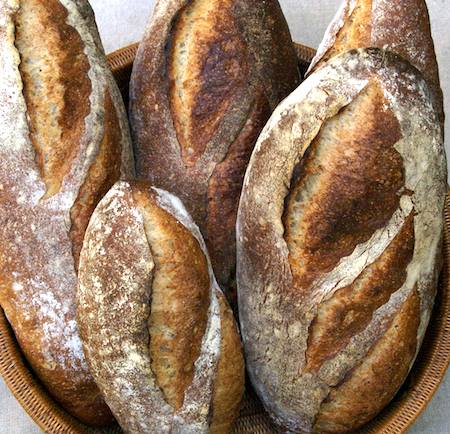 One of the questions I get asked most often is how to take a bread recipe and substitute sourdough starter for baker’s yeast.

The short answer, in my humble opinion, is: you can’t. Do I hear gasps? Can Ms. Wild Yeast be advising against using wild yeast?

No, she isn’t. But let’s think about this a minute. You have a recipe you like, and it uses baker’s yeast. (You do like the recipe, don’t you? Otherwise why would you want to keep it around?) Now you want to simply take out the the baker’s yeast and replace it with wild yeast. Simple, right?

But with sourdough starter, you’re not only adding yeast, your’re adding flour, water, bacteria and the acids they produce (these are what make sourdough sour), alcohol, and other compounds that are products of fermentation. And in so doing, you’re potentially going to be changing (for better or worse) some things: dough consistency and strength, fermentation time, keeping quality, and, of course, flavor and texture of the bread, to name a few.

So, what was it you liked about that original recipe, anyway? If you care to, you can read more of my thoughts on tweaking recipes. It pretty much boils down to this: if you do things differently, you may well wind up with a different result.

That said, I don’t want to make it sound like you can’t or shouldn’t use a baker’s yeast recipe as a starting place to develop a different, sourdough-leavened, bread. What I can tell you is where I would start If I were going to do this (and I have, plenty of times). What I can’t give you is a pat formula — and that would be boring anyway, wouldn’t it?

I’m assuming that you use a scale, know the hydration of your starter, and are starting with a recipe that gives ingredients in grams. (If you don’t, I’m very sorry but I’m probably not your best bet.) I’ll also assume your original recipe is a “straight dough;” that is, it does not contain a preferment such as a poolish or sponge; I can talk about those in another post if anyone is interested.

I start by thinking about how much prefermented flour I would like to have in my dough. In other words, how much flour will be contributed by the starter I will add? Typically this is between 15 and 25%, although for rye and whole-grain breads it is often higher. I think a good place to start is 15% (which is, by the way, the percentage of prefermented flour in Norwich Sourdough). If you don’t like the result you can change it on the next batch.

Now look at the original formula. Let’s say it is

These numbers are the easy part, and remember they are just a starting point. Some things to keep in mind: