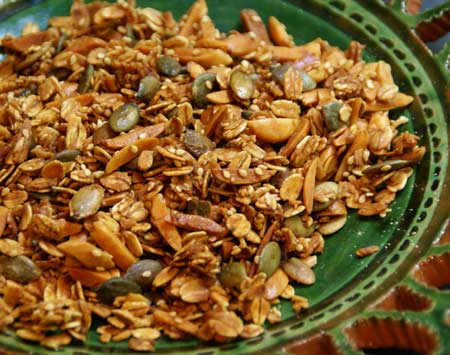 I made granola for BreadBakingDay. You may be thinking: Ahem, this is BBD, not BCD (BreakfastCerealDay). To which I would reply: True, but this granola is so much more than a breakfast cereal. Bear with me.

Ten days ago, I had never made granola. I hadn’t eaten granola in years. Granola was merely a faint shadow lurking at the periphery of my long-term memory. Then I read about Molly’s favorite granola on Orangette, and I thought, this looks good. In fact, this looks great! Not to mention ever-so-easy. And, modulo a substitution or two, I had all the ingredients on hand.

A couple of hours, a batch of homemade applesauce, and nearly three pounds of oats, nuts, and seeds later, I could confirm that Molly does not exaggerate: the stuff was amazing. My family thought so too. We ate it with milk. We ate it with the rest of the applesauce. We ate it with yogurt, with almond milk, and right from our hands. We ate it in the morning, yes, but in the afternoon and evening, too. We showed no restraint whatsoever. Within two days, it was gone.

Nothing to do except make more. But let’s face it: although this sweet crunchy ambrosia may be chock full of fiber, protein, and good fats, it’s not exactly low-calorie. If we were to maintain a rate of consumption commensurate with that first batch, we’d be sorry, and soon. How to make it last a little longer?

I didn’t have to ponder that for long. When Astrid (Paulchen’s FoodBlog) announced that the theme for BBD #09 would be bread with oats, I knew exactly what I was going to do with some of that granola 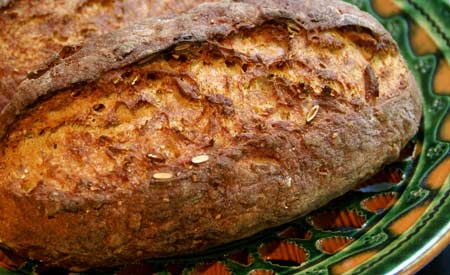 OK, I admit this bread is pretty energy-dense in its own right. But it has 60% whole-grain flour, and with no additional sweetener beyond what’s in the granola, I would not call this a sweet bread. Also, the rather close texture means it can be sliced very thinly so the love can last and last. I can live with that.

I followed Molly’s granola recipe, which is itself adapted from Nigella Lawson’s Feast, quite closely. I made a couple of ingredient substitutions (including the pumpkin seeds) to accommodate my pantry stock. I also converted the volume amounts to grams so ingredients can be weighed; this is especially handy for the sticky ingredients, which can be added directly to the bowl on the scale without needing to wrangle them out of a measuring cup. I’ve posted my version of the recipe after the one for the bread. 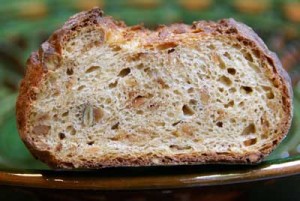 The bread was inspired by one in King Arthur Flour Whole Grain Baking, although mine has a good bit less sugar and fat, plus a number of other modifications. Oat flour has no gluten to speak of, so the dough is more fragile than one made exclusively with wheat flour. Also, the potato makes the dough quite sticky. Don’t be alarmed if it seems more like a thin cookie dough than bread dough until you’re well into the mixing.

The dough is mixed initially without the granola, and it needs to be mixed for quite a long time (perhaps up to 20 minutes or more) before the gluten develops. It is also given two folds during the initial fermentation to strengthen it, and by the time it’s ready for shaping, it is quite strong and holds its shape very well. (So well, in fact, that when one of the loaves flew off the peel on its way to the baking stone and landed on the open oven door, I was able to pick it up with oven-mitted hands and deposit it onto the stone with no discernible effect on the finished bread.)