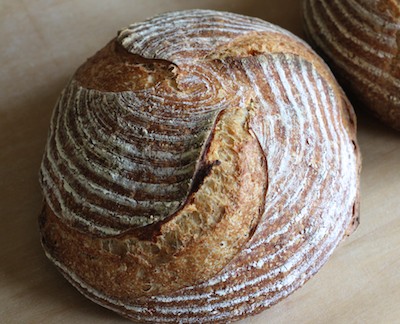 Using old bread to make new bread is certainly nothing new. The practice of adding an “old bread soaker” to dough has been used in Europe, especially Germany, for hundreds of years. In Bread: A Baker’s Book of Techniques and Recipes, Jeffrey Hamelman writes, “The practice of soaking old bread and then adding it into a new batch not only makes economic sense, it also gives a rich depth of flavor to the new breads. Far from being expended, the old bread contains much that is still fermentable…”

This sourdough bread uses old bread in a slightly different way. Instead of soaking it, I wanted to find out what would happen if I turned some week-old Norwich Sourdough (crust and all) into fine bread crumbs and simply let the crumbs stand in for a portion of the flour in a new batch of dough.

I have to say I’m pretty pleased with the result. Not only is the flavor rich and toasty, and the crumb pleasantly speckled with brown flecks, but this must be one of the longest shelf-lives I’ve ever seen with any of my loaves. I’ve gone through about 2/3 of a one-kilogram loaf in a week, and I am still able to cut, chew, and enjoy it. 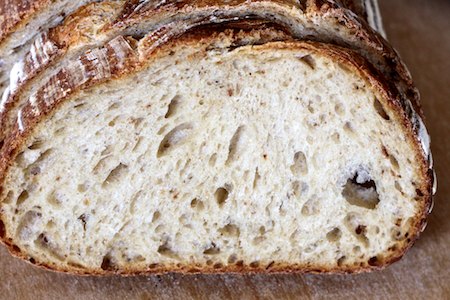 The recipe is essentially Norwich Sourdough with the rye flour (about 10% of the total flour in the dough) replaced with bread crumbs. I also cut back on the salt a bit to account for the fact that some salt was already in the crumbs. I kept the hydration the same, and I think that was about right.

To make the bread crumbs, I cut approximately one-inch pieces of the old bread and ground them in a food processor until they were mostly quite fine but still had a bit of texture. 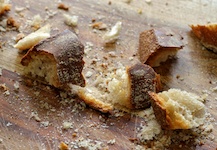 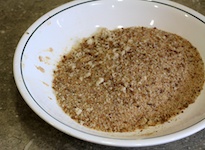